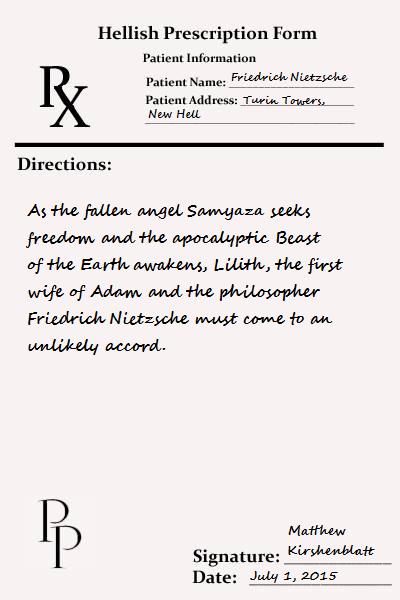 A late, but timely prescription. There seems to be a case of DOCTORS IN HELL going around. You can prepare for the upcoming epidemic: now through both Kindle and Book. If you would like to warn people of what is to come, I hope that you will consider sharing this prescription and perhaps even investing into some reviews of your own.

And here is another infernal prescription for you: namely an interview of mine with Jennifer Loiske regarding my own strain of story in Doctors. Apparently in this case, I am the first of the fallen: namely the first Hellion to be featured on her site about our book. Bill Snider (ZombieZak) is right after me and while we are the first, we will definitely not be the last. Seriously, I hope — somehow, as I should have left that outside the gates by virtue and vice of what I have done — that you will check out the works of myself and my fellow Hellions.

My pandering to my readership aside, I think this is going to be a very short post. I’ve vastly overestimated my energies. The first week of my LDEEP program was a major adjustment, but even through the exhaustion at home I would still be able to write and engage more online. But now after the third week of the program, I find I’m more tired than before and it takes actual energy to write anything — or indeed do anything — after an early day and night. I’m honestly just hoping I won’t pass out at my computer again like I’ve, admittedly, been doing from time to time.

I am finding that I really need to pace myself. If I have time to myself for a bit in the morning and I can leave at my own speed, I am generally fine. It’s not an exact science and sometimes I feel like I have traded issues with my headaches for my stomach: though the stress management is universal. Deep breathing really helps: along with, again, having my own space. But either way, it is an ongoing experiment.

I do know, however, what I want. I want to do what I am doing now. I want to write the way I do, and get paid for it. That’s it. That should be one of my focuses. For now, though, I’m going to take a step back and enjoy what I’ve actually achieved so far, and see where I go from here.