I can’t believe I never told the story of how I met Stan Lee, at least not on this Blog.

There were actually a few times I saw him, outside of his Marvel Comics, and even his Marvel Cards: of which he has Stats, obviously.

I met him in two dreams. The first time, was on August 10, 2016. According to what I painstakingly unearthed from Facebook’s terrible search history:

“had a dream yesterday of running into Stan Lee at the Toronto Reference Library. He was dressed as a janitor and it felt like he was making a cameo in wherever it was I found myself. I was in front of a bin and I found a collection of my old crudely drawn and pencil-crayon coloured comics. He asked me if these were mine. I said I used to make these, once. Then I took a book exactly identical to the one I picked up, somehow already in my hand, and put it with the rest.”

I don’t actually remember what was even in the book, assuming it existed yet: or became words instead in reality. I did draw once, a long time ago, inspired by his work and others even if I didn’t fully understand what he did, then. It was a while that I would interact with him, dream or otherwise, until May 18, 2018:

“where I was lost in a giant version of my University, thinking I hadn’t graduated grad school. Then Stan Lee made a cameo in my dream and got younger, and younger, as he initiated a conversation with me. He said I will meet with him on a Wednesday or something. Then he was gone.”

Somewhat appropriately, that was the last time, so far in another reality, that I interacted with him.

But then, there is the story of how I met him in reality. I must have told it to a few people, and I didn’t really write it out. It was between August 31 and September 1 of 2016. I’d gone through a rough year where, finally, after being jerked around for so long I got on social assistance in the form of ODSP. I’d challenged the legal system, as part of the system, and they settled with me out of court. I had been worn down, and tired after years of this.

And then, one day, I discovered that Stan Lee was coming to Fan Expo. That this was a special event, as fairly soon he wouldn’t be travelling out of the United States. I decided, then, despite my history with the previous Fan Expos — which were organized by HobbyStar — that I had to see him. I had to see the man who helped to create some of the characters in the comics that inspired me, and not only helped me create stories, but even learn how to speak and write words period. I had to do something to revitalize who I was, and as part of something that meant a damn to me.

So I not only went to Fan Expo, but I bought “Backstage Access,” such as it was to Stan Lee himself. That Fan Expo was one of the best events I’d ever attended in and of itself. It had new management and organization, thanks in a good part to Kevin A. Boyd, whom I knew in the comics scene, and met when he owned the Comic Book Lounge and Gallery.

I’d met Alex Kingston and Michelle Gomez, River Song and Missy respectively at that Expo, as well as seeing a Jay and Silent Bob Get Old Show. Bu then, there was Stan Lee himself. I’m going to try to piece in some excerpts I wrote down from Facebook at that time, and then my own impressions about meeting the man personally.

First, when he finally did come on that stage, mostly legally blind and hard of hearing, when he came up there in his old sweater and pants, and his dark glasses under the cheers of everyone in that audience, thirty years at least seemed to slough off of him. He smiled the brightness smile, and waved, and cracked jokes. And there was just this … presence about him that I’d seen in videos, and heard about, but I never truly felt, not personally, and until that moment.

Here was one observation I managed to write down from that time:

There were two poignant moments in the Q+A Panel with Stan Lee today that I want to write down here.

The first was his response to what it was like to work with Jack Kirby. He told us that it was like watching someone tracing a story or a picture that was already there inherent in the page. He said that Kirby was never late and he never complained: that these were some of the reasons why he was called the King.

The second thing he said was in response to whether or not Peter Parker should be allowed to grow old. He told us that Spiderman still has stories to tell and as long as he does, he will remain young forever.

Given that this is supposed to be Stan Lee’s last trip to Toronto, there is something that really hit home about that. And you know, maybe he’s said all these things before. Maybe he is just repeating himself. But until today I didn’t get to hear *him* say these things myself and I am glad that I did what I had to in order to do so.

A bonus: Two people asked him two different questions. A kid asked him “What advice would you give to DC to make a movie that’ll make critics happy?” while another person asked him something to the effect of why Marvel films have worked out so well.

He tied both of these into a cameo theory: this self-effacing joke that people see the Marvel films for his cameos, and see them multiple times in case they missed them the first time. He also suggested that maybe he should star in a DC movie and write one.

The hilarious part is that Stan Lee actually did write something for DC called Just Imagine … where he re-imagined the origins of DC superheroes he had written them in “the Marvel way.” In the unlikely legal event that this mini-series ever got film rights, Stan may just get his wish. Whether that is What If? or Elseworlds jurisdiction, I don’t know.

All of this is still relevant, even now. He has probably said many of these things before, but it just felt … different, hearing them again. And then, there was the Backstage Event. Not only did I get to keep a lanyard from that time, but afterwards he signed my copy of his comics autobiography illustrated by Colleen Doran, and he took a picture with me.

Before that, however, the rest of us with the Backstage Access, a smaller group crowded under the podium, moving closer to hear more of what he had to say. I probably forgot a lot of it, much to my shame. But here is what I did write down — again — on Facebook. It was something that I actually didn’t do:

I do want to mention one more thing. I actually did have a question for Stan Lee at his Backstage Event. Unfortunately I wasn’t chosen as we ran out of time,, but my actual question was to name one comics idea he had that he never had the opportunity to use. He probably would’ve wise-cracked his way out of it and told me to get one of my own, or his helpers might’ve given me the stink-eye, but there you go. I think I will leave you with that for now.

But regardless, I was in the line with others to meet him. Some had Captain America Shields. Others had vintage comics issues. One girl tried to flirt with him in a costume that, for the life of me, I can’t even remember. And then, I came up. He took my copy of his autobiography, and scrawled his signature. Then I said to him: “Excelsior, sir.” He snorted, either not hearing what I said, or being amused. His helpers certainly looked bemused by that.

Then, we took a picture together. He smelled of scotch, and old man. Like my uncles, and grandfathers did at times. And that was the first, and last time I ever saw him in his physical avatar.

It meant a lot. More than I even knew. I think just that Fan Expo, and the experience in the audience listening to Stan Lee, and then meeting him after he told us some stories that I could see him telling people near a hearth with some bourbon on the rocks helped rekindle something that had been so battered, and tired inside of me.

A lot has happened since then. And now, today, the man himself has gone to go watch the Watchers, and annoy the fuck out of them.

I almost didn’t go to that Event, you know. I was ready to cancel going to a Fan Expo I’d previous been disappointed with, just to see my girlfriend at the time in the States. But that was one instance where I was thankful that her schedule interfered with our previous plans, because that rescheduling encouraged to do something I never thought I’d do again, and to meet someone I never thought I’d have the chance to see: a person who helped influence me, and the imaginations so many others.

So I’m going to say what I’ve already said on other social media:

Excelsior, Stan Lee. I’m glad I got to meet you. I hope make to a tenth of what you made, and helped produce. Thank you, for all of it.

And for the chance to have my own, brief cameo. 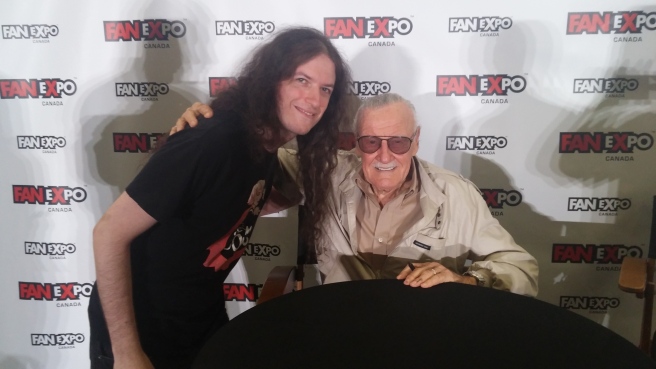