Because, you know, I haven’t written nearly enough about Christine Love’s Hate games or, really, her created world.

For those of you who have played the games, I think I don’t really have to say Spoilers, but I’m going to anyway so that people don’t get angry at me. Perhaps someone has already discovered or suspected something. You see, it all began last night after I wrote another Blog entry–which I planned to post today–and wrote down some notes for another story of mine. I was lying in bed past five in the morning when, suddenly, something clicked into my head.

I would have totally missed this evilness if I had just continued using my Saved Files in Hate Plus. But, out of curiosity, I decided to start a game once without my Saved Files: just to see the Quiz that comes up. You remember the Quiz right? The one where you click on a list and it decides what kind of interaction you will have with your chosen AI, who your chosen AI is, and–and this is important–who you are.

And this, my friends, is where Christine Love is potentially evil.

I say potentially because I actually reread the Quiz just now and realized something else. There is one part where it asks you which year you would have preferred to live in: 1988, 2027, or 4989. In my exhausted mind I thought it said which year were you born in.

I started to have this thought and it’s still valid I think and you can interpret it any which way you want. In both Analogue and Hate Plus you discover two very interesting things about Christine Love’s world. First of all, you discover that *Hyun-ae’s father in Analogue created or utilized a method of imprinting human brain-waves into an AI. Second, you also discover that Earth has found a way to give AIs physical humanoid bodies. I mentioned in my previous post the possibility of AIs from the 80s of Christine’s world having continued to exist to the point of 4989.

Now, think about that for a few moments.

Surely AI would have been granted equal rights on Earth by the 50th century. And with the technology at their disposal–being the product of technology themselves–they could make themselves into anything that matches their personality and what they want to be. At the same time, perhaps humans have learned and perfected a similar process to what *Hyun-ae’s father made–because inventions like this do not exist in vacuums–and some formerly biological humans have learned to download themselves into humanoid forms that can experience all the five senses and perhaps more.

There might be evidence against this. Surely the need for a multiple choice Dialogue Wheel could be circumvented by someone who was an AI, but the issue there is that the White Princess–your ship’s–technology is at least over two thousand years more advanced than the Mugunghwa‘s older generational ship pre-Faster Than Light systems. It is so … 25th century compared to your technology … to potentially you. Even before the ship-made cultural regression they would have been astounded by humanoid bodies: though they may have been conceptualized by that point.

What I’m trying to say is what if you–the investigator–are, in fact, an AI? That would be the ultimate in transhumanism. After all, if you start an entirely new Hate Plus game you already have the choice of deciding what gender you are: he, she, or they. Hell, with the option of they it might just be about gender but different personalities or collectives as well. And even disregarding that and looking at Analogue, Christine never really has you identify your gender unless it’s with *Mute and neither AI thinks to ask whether you are human or not–if that distinction is even applicable to their perspectives–because you are communicating with them from the outside and you might be having to adapt to vintage technology (and manually interface with it to either avoid potential corruption from direct immersion into an unfamiliar system if you are capable of transferring your consciousness back and forth from interface to body or because it is your make or preference to access computers manually) no matter whether you came from bio-matter or circuitry.

And what’s amazing is, whether this is true or not, it really doesn’t change anything. You are still an investigator who may or may not be lonely meeting these two strange beings that can potentially take your heart away. I always suspected that Earth was different and even though it still wrestles with mortality and there seems to still be biological humans there, it doesn’t mean none of this is an issue.

And as for a coworker from your dispatch referring your companions to an AI “robopsychologist” … well, just because you might be an AI doesn’t mean you need to see a therapist–just like if one human sees a therapist it does not mean another one needs to see one–whereas *Hyun-ae and *Mute certainly do. You are also never named: so you will never see if you have an asterix next to your name as all of Christine’s AI do.

I like this end-ended idea a lot and this speculation just adds to the experience for me. You can believe what you want. As for me, I think I will avoid taking the Voight-Kampff Test. Aside from the fact that it’s for androids and not necessarily for other AI, I think the subject of being an AI in Hate is akin to Rick Deckard’s “lesbian question” and how it’s kind of … irrelevant and no one else’s business but your own this case–both in terms of Hate Plus and myself. Really, the way I’d like to think about it, it’s kind of like being asked what the sex of your upcoming child is going to be.

I think I’m going to keep that fact as a pleasant surprise, or a mystery. 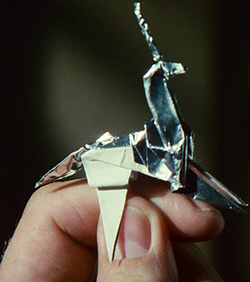 2 thoughts on “The Birth of *You? Player-Identification in the Hate Games of Christine Love”