So now I’m going to do an actual review of Peter Jackson’s The Hobbit: The Unexpected Journey. And yes, there will be spoilers in addition to Middle-Earth references. So watch the movie first please, and I will try to be more specific with my Tolkien knowledge as well.

Anyway, let me start this off by stating that the last time I’d seen so many singing Dwarves was back when I first watched Snow White. But all joking aside, I really liked this film and the entire world, the story thus far, and even the singing elements were incorporated well. The narrative begins slowly and much in the way that the multitude of trailers suggested that it would. I smiled when I saw Bilbo on the screen writing in what would become the Red Book of Westmarch.

I was puzzled, though not completely surprised, to see Frodo in those initial scenes as well. I know that many people have had some issues with him being there: saying that his and Bilbo’s interactions were superfluous to the plot and point of the story. But it was refreshing to see Frodo there: young and unburdened by the absolute hell he will be thrust into much later on in his own saga. He also provided a nice counterpoint to Bilbo as an old, and as a young Hobbit.

So now let’s get to the adventure. I’ve not actually read The Hobbit in some years, or read all of The Unfinished Histories and Tolkien’s notes, so you Tolkienites please bear my ignorance as much as you can. I really liked the encounter and banter between young Bilbo and Gandalf. But I think what I caught my eye in particular were two things in this beginning. First, I appreciate how each Dwarf that comes to Bilbo’s home looks and acts differently from his fellows. They looked very different from my kind of generic view of Dwarves in my head when I first read the story. 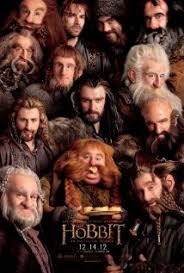 And then there is Bilbo. I’ve realized now that Bilbo has always been my favourite Hobbit for a variety of reasons. I guess I can relate to him: as the unwanted person thrown out of his comfort zone and not always wanting to be there. But there was one part in the beginning of the movie that Gandalf states: namely about how once Bilbo used to take after the adventurous Took side of his family before his mother died. And that really turned my head because, from what I inferred from that comment, Bilbo almost seemed to become sedentary and stuck in his ancestral Hobbit-Hole after his parents were gone. For a few moments, it made me wonder if it was a bit of fear or grief that changed Bilbo from a child to a more conservative Hobbit at the time. Even if it was unintentional on Jackson’s part, it was a nice detail.

The Dwarves, like I said, were fleshed out well and their singing more than appropriate given the nature of Middle-Earth as we have seen it through Jackson’s perspective and the gravitas of their quest. I talk about some scenes that really touched me when I watched this film and made me really relate to it, so now I can go on and mention some things I didn’t talk about in my previous post.

The panoramic views of the Shire and the path the company of fourteen (or thirteen and a half) take are breathtaking as always. I think that sometimes the film compensated for certain aspects by adding a lot of battle scenes. I don’t, for instance, recall Gandalf being involved with Bilbo’s dealing with the Trolls quite the way he had. At the same time, I loved how other things were inserted into the film narrative.

I absolutely loved Radagast the Brown. He is so unlike Gandalf or Saruman. He is kind of goofy and ridiculous, but he is still an Istari–a Wizard–and he acts like one when he needs to. There is something very shamanic about how he looks: especially with his fur robe and hat, and his sleigh of rabbits. I loved the nod to Middle-Earth lore with the mention of Ungoliant being the ancestor of the giant spiders of Mirkwood, and also Gandalf mentioning the two Blue Wizards whose names he … can’t particularly recall after two thousand years (which is fair because even now not everyone who has read the Middle-Earth books is sure what they were called or really whatever happened to them in the East). Now, what really intrigued me was the White Council. You know: Gandalf, Galadriel, Elrond and our favourite White Wizard-before-he-becomes-an idiot-Saruman.

I do recall Gandalf disappearing, or not appearing, in the book’s narrative at various points and apparently Tolkien’s notes and The Unfinished Tales have explanations as to what the Grey Wizard was up to during those times. And believe me, he was not just smoking pipeweed or drinking red wine or … letting Galadriel stroke his hair. I like how they draw The Necromancer into this saga and even how Saruman has some hilarious lines. Really, he was so serious in the Lord of the Rings films, but his comment about Radagast, as short-sighted and arrogant as it is, is really kind of funny. It also makes some matters clear with regards to what might happen in the other two Hobbit movies, and I will get to that later.

Before I move on though, I really like that gesture between Gandalf and Galadriel. All I can say is that Elves have a very different culture from the race of Men and a very radical understanding of the world. Galadriel actually has a husband and consort–Celeborn (who is known as the wisest Elf on Middle-Earth, take from that what you may)–so the gesture between her and Gandalf could be as an old friend and colleague comforting another.

At the same time, it should also be mentioned that Gandalf is not human, nor is he an Elf. He is a Maiar spirit: one of five sent from the Undying Lands by the Valar (or gods) of Middle-Earth to help the land deal with Sauron: who is also a Maiar. He is a powerful spirit that has been manifested, or chose to manifest in flesh. Galadriel herself is thousands of years old, but Gandalf is much older. He could have looked very different back in the day and they both lived in the Undying Lands once. Also, he has worked with her and the White Council closely and Galadriel herself is probably the most approachable consolatory member of the rest. So whatever the case, there is definitely a history there between them and it is fun to think about.

Now onto other matters. I must say that I have never heard of, or really recall the stone giants in The Hobbit or anywhere in Middle-Earth and it makes me wonder if Jackson simply put them there. They look like animated humanoid rocks that throw each other, and I will avoid making a pretty self-evident crude joke about the matter, but they were jarring to see in an otherwise seamless film.

I really appreciate the rapport of riddles and then the subsequent treachery between Bilbo and Gollum. I never get over how sorry I feel for Gollum and the way that he is almost friendly but vicious with Bilbo, ultimately insane when his ring is gone, and then completely despondent. That last is actually heartbreaking to watch.

So … now for the end. My brother wondered just why it is that the Great Eagles took the whole company only halfway towards the Lonely Mountain and not directly to the Mountain itself. I also wondered about this and I’m pretty sure that How It Should Have Ended would have addressed this much in the same way they did Lord of the Rings. But it actually makes sense when you think about it. Gandalf and the White Council were very reluctant to let the company go to disturb the Mountain because of the Dragon Smaug. Even Gandalf was concerned that Smaug might awaken and ally himself with Sauron.

Now, if you’ve seen that ending and you see what one bird managed to do can you imagine what would have happened if a whole flock of giant Eagles with twelve Dwarves, a Wizard, and a Hobbit with a Ring of Power (that he might not put on as of yet) came to the Mountain right away instead? Place your bets as to who would actually prevail in that immediate struggle. Then wonder what Smaug might do after that. He might just go back to sleep. Maybe. Anyway, it’s kind of a moot point at this time considering.

All in all, it was an excellent movie. I suspect that the second movie will deal with Smaug himself, and then the third will focus on the aftermath and the Battle of the Five Armies. But for now, I give this film a five out of five because, I think I am quite ready for another adventure.

P.S. And my answer to How It Should Have Ended‘s Lord of the Rings are Nazgul … on Fellbeasts.

4 thoughts on “Film Review: The Hobbit: An Unexpected Journey”