When we last left off, our intrepid heroes were continuing to work on the formative phase of a silent comic. Much of Angela O’Hara’s pictures in the previous Project entry are of our female protagonist and as you can see here, she has been busy with her. 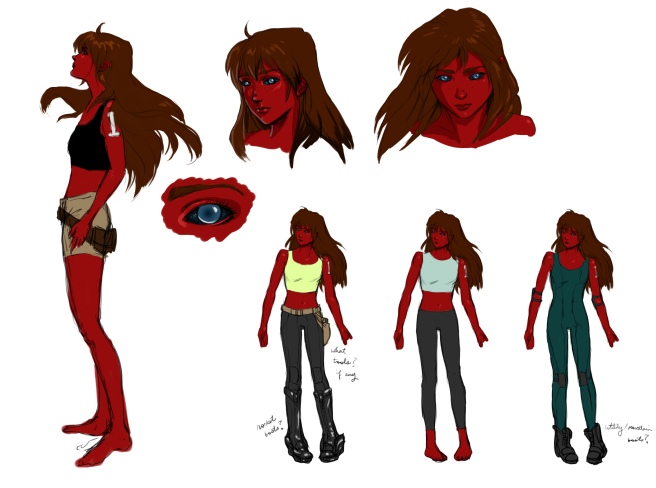 Notice the eyes. They are not only how I thought of them–pure blue–but Angela even went one further by giving them the detail of actual sclera and pupils while also keeping them the same colour. Angela has also been playing with facial expressions, some dimples, and conveying certain kinds of emotion with every facial image that you can see here. There is something very serene, sometimes sad, but ultimately determined in this heroine who is questioning herself as she continues on her path through the strange little world that we are making for her.

While our heroine is getting more detailed, we are also working on fleshing out our antagonist as well. 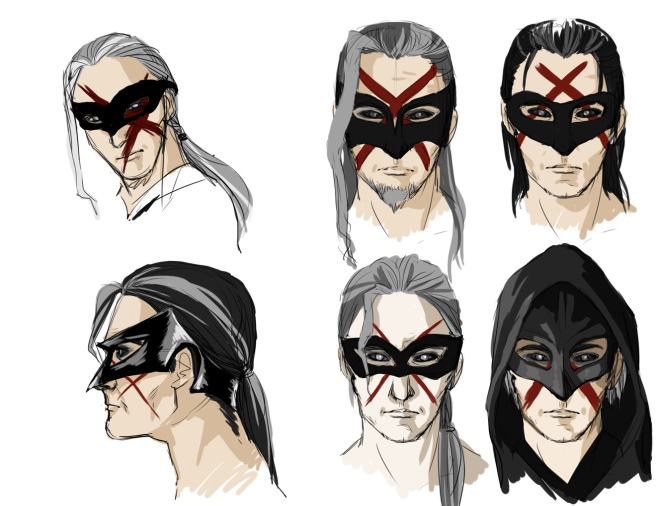 Like our heroine, I provided and talked with Angela about certain details. He is supposed to be an older man and he is obviously different from our main character. It’s been a challenge to figure out what he’s supposed to look like as of yet. What I find works for me is looking at these conceptual drawings with Angela and picking certain details from these already made illustrations that can be incorporated into a figure closer to what we both want to work with.

For instance, I really like the idea of an X-like scar on his cheek: an aesthetic very reminiscent of the protagonist in the manga Rurouni Kenshin. In fact, as we talked about this online, I figured out exactly how he got that scar even though I didn’t originally plan on having this “X” on his skin. I was more thinking of having it on his costume, but Angela’s initiative worked out well. 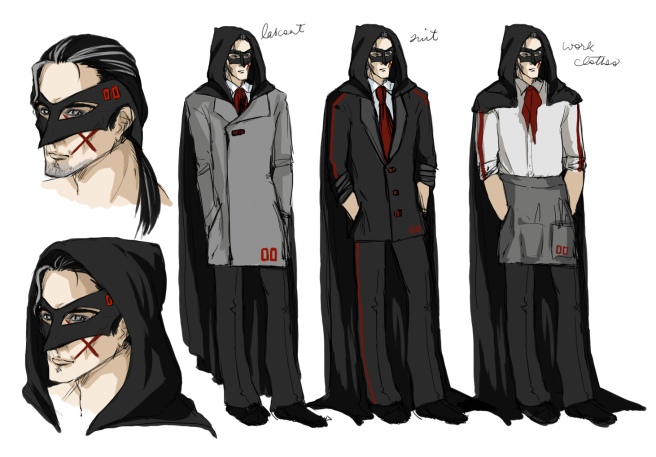 So basically I decided he would look older, but not grizzled or ancient. The mask has also been a challenge too because I had been thinking of having it cover his whole face and making him look more mysterious as he watches our protagonist at work. Of course, the advantage to the half-mask–aside from the fact that it plays with our theme–is that it shows more facial expression and therefore more humanity. There is a part of me that does wince at it seeming too much like a stereotypical comic book hero or villain’s mask, but at the same time this is definitely something that want to play with as well.

We are still  working on what the suit should look like. I do like some of these designs in these latter pictures. I like, for instance, how Angela puts the “Zero” symbol at the lower-hand corner of each costume. That was one issue I was having when I was envisioning how to fit the “X” and “Zero” symbols together on his person. I mean, he’d not be very intimidating if his sigil was something derived from a  “Tick-Tack-Toe” game. In terms of the clothing in the latter set of pictures, I can definitely see at least the lab coat becoming a basis for another costume. In fact, we’ve talked about giving him different costumes depending on what environment he’s in and what he is doing. I mean, he has the resources. He has the technology. 😉 We just need to see where he goes from here.

And now to the Boink! part of our creative progress.

This Calvin and Hobbes reference aside, when I was much younger I fancied myself something of a graphic artist as well. The thing is, I had difficulty imitating basic shapes. At the same time, I liked to create monsters. To this day, it’s safe to say that I create better monsters than I do humanoids. I knew that in addition to the heroine and antagonist, we needed to have some other creatures and enemies in our developing environment. Now I could have simply described these, and to some extent I did describe them to Angela on email but pictures speak louder than words and so I unearthed these images. 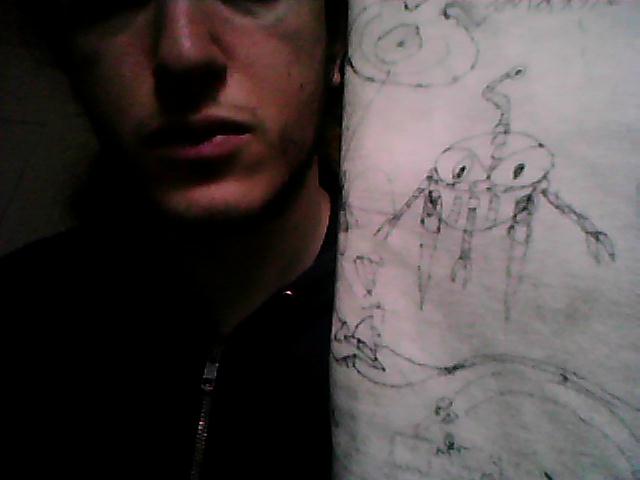 (No, my blurred face is not one of the monsters … I think.) 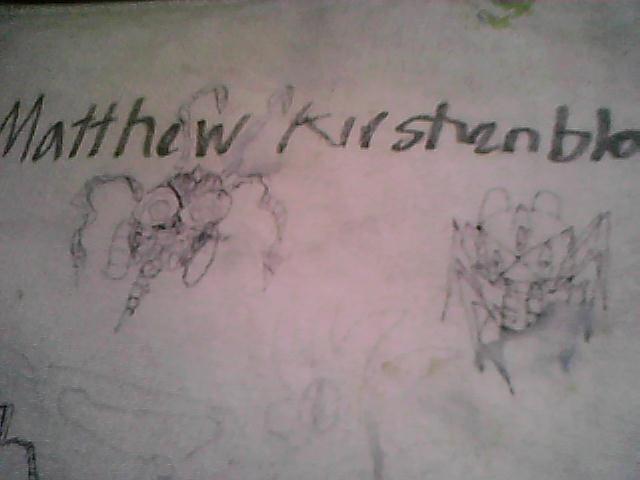 See, those three pod-constructs were robot minions that I created for a primitive high school comic about a stick-man from a cartoon dimension who gets crippled and reconstructed into the Styx Demon by aliens. These were supposed to be the aliens. I used to have drawings of these with ink pen and pencil crayon colouring, but they are sadly lost to time. When I sent these to Angela, it was like an archaeology of my drawings: taking pictures of and documenting glyphs from my old high school art kit. 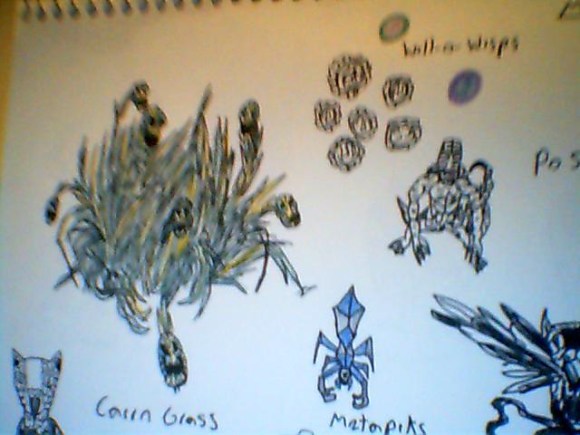 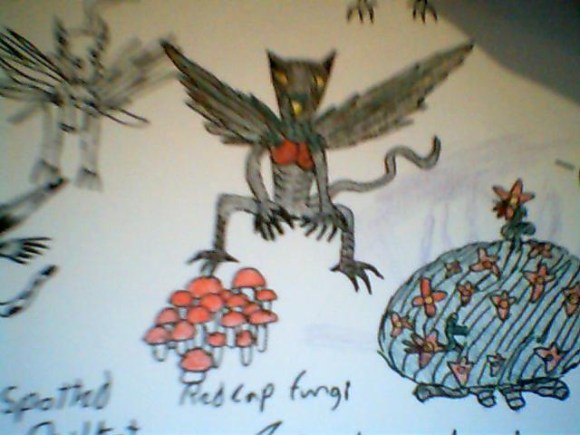 These two kinds of beings in particular, from what I remember, were created as creatures for an old RPG game I had planned: something that people could scroll through a Paint Program to interact with. To this day, I still love that Cairn Grass. These drawings sat in my closet for years, just as the ideas that made them have rested in my mind. The idea is for Angela and myself to use some of these as templates to … make things that our heroine can interact with.

Sometimes, I feel like my part in our creative process is very ad hoc. I don’t have a script ready as of yet though I have created a rough outline of the events that I want to depict along with some notes on character personality and a little bit about how their abilities work. A lot of the interaction between Angela and myself has been exchanging ideas. I admit that sometimes I feel bad for not having a detailed enough script as of yet, but there are still some decisions that need to be made and I’m glad that it is not a case of me dictating to another person. Much of our creative decisions so far have been the result of a mutually creative exchange of ideas, shared enthusiasm, and just throwing stuff out there. I’m given to understand that each comics–and creative–collaboration works differently and so far, our works just fine. 🙂

Angela has just told me that she has some special pictures planned for next time: something that may or may not have been influenced by talking about old video games. I look forward to seeing where this goes from here.

2 thoughts on “Artistic Progress Goes Boink!: The Refinement of a Heroine, the Formation of an Antagonist”