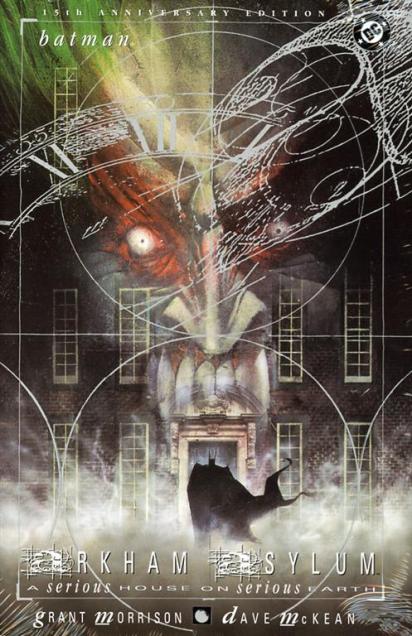 I’m specifically talking about Grant Morrison’s Arkham Asylum: A Serious House on a Serious Earth the 15th Anniversary Edition. Considering that it has existed since 1989, the book has no doubt had many reviews at this point, but I feel that I have a few things to say about it: things that have been on my mind since I last read it.

What I find very unique about this comic is not what it is about, but who. You might think to yourself it is obviously about Batman, but while he is obviously a main protagonist in this work and it deals with him facing his own fears and psychological issues the story is not purely about him. The story is not about the villains that he has incarcerated there either: though they have lured him into the asylum to face said fears and the torments that they have waiting for him. It isn’t even about Amadeus Arkham: the tragic founder of the mental hospital that was supposed to save and repair criminally insane minds.

No, Arkham Asylum‘s main character is Arkham Asylum. Character as place is not a new idea. Certainly, I had to face something similar when I was writing part of my Master’s Thesis on Alan Moore’s Voice of the Fire: where the protagonist of that work was actually Moore’s hometown of Northampton. But unlike Northampton that has many layers of different gritty and earthy human activity, Arkham Asylum is many nuances of madness.

Morrison doesn’t pull his punches here. He draws on Jungian psychology and archetypes, the Tarot and mysticism, and poetry and crazy itself as he depicts Batman’s essential descent into the underworld or the demented collective unconscious that Arkham has become. He also has an Alice and Wonderland reference or two. Morrison seemed to really like using those, just like Alan Moore in his Miracleman comics. Then there is the name Arkham itself to consider. From what I understand, it is derived from H.P. Lovecraft’s creation of the fictional city of Arkham, Massachusetts: the seat of the strange and eldritch Miskatonic University. It has been used as a name for various fictional places, but it really has a nice and eerie parallel with Gotham’s most terrifying asylum.

The fact that it was once a house–a very Jungian archetype for the makeup of an individual’s consciousness–and the person who once lived in it failed to turn it into a place of healing and ended being locked away inside of it speaks some major volumes right there. The atmosphere of this comic is distorted and schizophrenic to the point of making even Batman seem disturbing and this is in no small part thanks to Dave McKean’s drawing style and painting.

Do not misunderstand though. The piece has its weaknesses and, ironically enough, those weaknesses are can also be construed as its strengths. For instance, I really like the broken mirror-reality that Dave McKean has depicted with his twisted nightmarish images and the different kinds of dialogue font, but at the same time they are very distracting and it is hard to make out key details that may have actually made all the difference in understanding the plot. The reason I like the 15th Anniversary version of this book is because of the detailed comic book script at the end of it.

You know, in some ways I liked the script a lot more than I liked the comic that came from it. If Arkham Asylum is of any indication of how Morrison writes comics scripts, it represents something easy to follow and enjoyable to read. In the script the mythological and archetypal references and many more uncanny details are much more apparent. It is also an added bonus to be able to understand what it is going on and what the characters are saying. At the same time, I will be honest: I respect his interpretation for Batman in this story, but I don’t agree with it.

The fact has less to do with Morrison’s choices and more to do with the popular idea that Batman is as mentally-imbalanced as his enemies. Do I think he was influenced by a trauma into a cycle of behaviour? Obviously. Do I think he saves people’s lives just out of a compulsion? Not completely. Perhaps each time he does do it to save himself or to save the lost innocence of the child he once was. I also think he saves peoples’ lives and doesn’t use a gun because he has principles and he has a certain sense of honour influenced by his own experiences like anyone else.

But there definitely were a lot of things I liked about this book: about reading the story of Arkham Asylum and the progression of the horrifying ritual and gathering of insanity over the decades that made it into the nexus of insanity that we all know and love. I also like how it makes you look at what precisely madness is and just where that fine line may–or may not–be. It was a psychological horror story and I loved it.

I do wish that I could have gotten more out of it without having to read the script, and I could be very mean and say that there is something wrong when you like a script more than the comic it is supposed to help create: but I do love McKean’s work here and the script is a nice complement with some scenes that didn’t make it into the finished artistic product. I’d definitely give this work a five out of five.

And that is it for now. Tune in next time, my friends. Same Bat-Time, same Bat-Channel.

ETA: It would be interesting to see someone compare and contrast Alan Moore and Grant Morrison’s use of Alice imagery as well as how they use the ideas of “reason” and “madness or intuition” or the “Dragon” and “the hero” in Miracleman, From Hell, Arkham Asylum and Red King Rising respectively.