I’m not sure when I’m going to be on here next, so I thought I’d stop by and tell you about some of my plans and perhaps a few upcoming events.

A little while ago, I decided to write full-time for Sequart. This means that I write 15000 words a month: including integrating graphics into those articles that talk about comics and sequential art. When I made this decision, it was part of my plan to supplement my writing and keep generating content while I spend time on my more creative works.

Something happened though. I began writing about LGBTQ+ issues through specific works. Then the 2016 American Election happened, and I have been writing about that a little bit. These have been areas that I have skirted around and didn’t really engage beyond acknowledgement as they weren’t in my area of lived experience, or my comfort zone. But this crop of articles has challenged how I write and I’ve realized since then that I do have a non-fiction writing style: something I cultivated on this very Blog.

The Editor-in-Chief of Sequart, Mike Phillips, gave me the following LinkedIn recommendation:

“Matthew is a great writer. One of the best Sequart.org has ever had, actually. Some smart people don’t know how to successfully, stylishly convey their intellect to the written word, but Matthew doesn’t have this problem. His non-fiction is meticulous, yet prose-like. That’s no mean feat! I’m so glad to have him on board here, and any publication would be better with him on their team.”

It really hit home for me that I am particularly specific in what I write about, what terminology I choose to use, and that I put in a little bit of flippancy and no small amount of geek references into my writing. But even when my writing is non-fiction, I write it as if it were a story. I particularly honed this after reading a few key books in a course at York University called The Literature of Testimony by Professor Sara Horowitz. I noted the power of their narrative voices and tried to emulate that and bring my own experience into it. It was on Mythic Bios, though, that I really started to let my voice come publicly into my own and put my ideas where my keyboard is.

But lately, with regards to Sequart, I feel like I’ve really been challenging myself. And I’ve realized that I’m actually fairly good at what I do. I was burned out from academia and I vowed never to go back to it after completing my Master’s Thesis. But when you make an article for a magazine, depending on what that magazine is, voice, relatability, your audience, and your enthusiasm can matter more than footnotes.

It’s been almost two months already and it took me a while to realize that I can actually do this, and if this is what I can do — along with making contacts along the way to keep doing it — then I can more than live with that. It’s funny. If you’d told me years ago, when I was a kid and I just read superhero comics that I would be writing articles on Sandman, LGBTQ+ issues, some politics, and Alan Moore I would have no idea what you were even talking about. It’d have been beyond my ken. I wouldn’t have understood what I was even making right now: even if a few years later some part of me, after discovering Philosophy, would do my damnedest to try and figure out just what the hell my future self was talking about and why it was so important to me.

Some things still get lost in text and you can only really figure out in experience. I wouldn’t have even dreamed of doing some of the things I do now. It’s funny how that works.

I’ve also applied for another writing job and we will see if anything comes from that. And I want to finish my comics script, possibly adapt a story of mine into a novel, and keep working on something that is the equivalent of a novel. I also have a lot of ideas for more articles.

But right now, I can’t focus on any of that. For the next two days, I’m going to be busy. I’m going to the opening night of Rogue One tomorrow and then the next day I will be roleplaying more Star Wars with my friends. 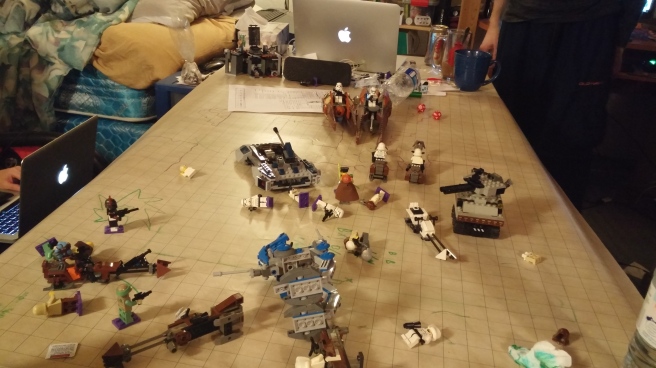 Some of my life is still not ideal right now, but it does feel like a few steps in the right direction. I may well be onto something if I keep up this groove.

If you’re interested, you can find my Sequart articles right on my profile.

I think, really, I wanted to write here about how far I’ve come: if only a little bit more before next year starts. I might have one or two posts on here before then, but if I don’t, I hope you all have an excellent New Year better than 2016 and that this amount of progress will continue. Take care all.