I think that if I were a Time Lord, I’d be a unique one that specializes in travelling to alternate timelines: not because I originally intended to, but due to the fact that these are places to which my senses are attuned.

Lately, not to mix metaphors, I’ve been thinking about Star Wars. I mean, when aren’t I? But bear with me. Imagine, in that period between 1980 and 1983, when The Empire Strikes Back made people truly want to know what happened next, George Lucas came up with a plan: a long-term plan.

We already know and suspect that by Return of The Jedi, Lucas was planning on heavily merchandising the hell out of his universe. Some people even think the addition of Ewoks in the last film was an attempt to particularly appeal to children and their love for toys. Even after the sixth film, we had cartoons like Ewoks and Droids.

But what if it didn’t stop there? What if aside from the made-to-TV Ewoks films George Lucas had wanted even more merchandising. At the time, LucasFilm was in the process of developing its special effects technology that would be utilized not just by itself, but by other companies and film productions as well. Even so, by the time of the cartoons it had only been a few years since Return of The Jedi and people — particularly children — were still fresh off of a galaxy far, far away and wanted more. More than that, and I can speak for myself here, fans had questions: about the Jedi, about the Republic before the Empire, and the Clone Wars themselves.

Many of these questions had been answered with the new CGI Clone Wars cartoons and the Prequel films — albeit with some gaps even now — but there was a gap of at least, what, seventeen years or so, between the films: where many of us waited after the re-release of the Old Trilogy to find our answers and immerse ourselves into new Star Wars.

Yet what if during that time, we had something else to tide us over during near two decades of waiting?

Indulge me and imagine this. After the last film and the initial cartoons, LucasFilm decides to release oncoming series that takes place during The Clone Wars. Perhaps Lucas calls them, collectively, Interludes. During this time, we get to essentially see the Republic and the Separatist Crisis, and the Jedi Knights. We get to see a young Obi-Wan and Anakin actually growing together but, more importantly, we get to see something else as well. 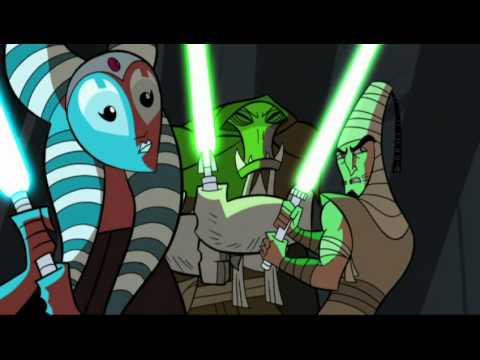 We are witness to other characters — other Jedi and galactic denizens — and we get to watch them grow. We are introduced to the clone troopers early and see them as individuals: while always wondering why they look so like and unlike stormtroopers. And there are hints of Anakin’s back story and how he met Padme. At this stage, perhaps a few seasons or an interrelated series of cartoons (perhaps aided in the 90s by one young Genndy Tartakovsky) and live-action programs: space opera serials not unlike the material from which their structure was derived. Can you imagine that? Coming home from school to watch your Star Wars show?

And yes, the intervening years between the early 1980s and the late 90s might not have much in the way of advanced graphics or special effects by our contemporary standards but imaginary worlds have been built on much less and with more attention to detail. I mean, look at some anime from that period, or even the Old Trilogy and how immersive it was for looking all run-down, and world-weary and real: letting our minds fill in the rest. I could have seen LucasFilm making a lot of money during this time. I mean, think of an Interlude series of Star Wars: Clone Commandos playing alongside G.I. Joe. Don’t tell me that wouldn’t be bad-ass. 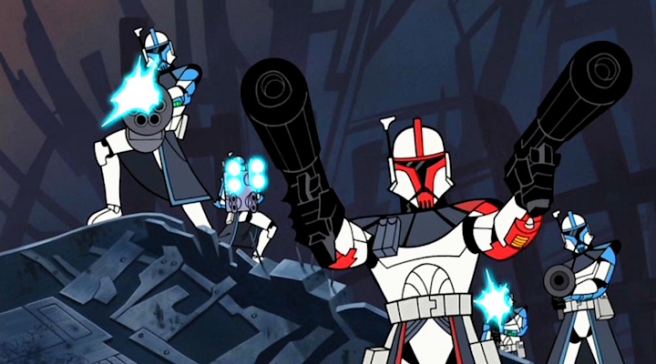 So during this whole time, you have all these background characters getting built up, living, and dying. You get immersed in their lives. Shaak-Ti, Aayla Secura, Kit Fisto, Plo Koon and the other Jedi have many adventures and you get attached to them. You see the Jedi Initiates as children and you want to be a Jedi: relating more to you directly as a child than even Luke does in the movies. Hell, you might even want to be Clone Troopers, have their special armour and play Clones Verses Droids along with Rebels Verses Imperials in the playground.

Of course, there would be comics and books as per usual. And then periods where there are no cartoons or shows. It makes the audience wait with anticipation. You build on the culture that you have already cultivated and created. The important thing is that you leave the questions. You have Anakin refer to his time on Tatooine and being a slave and you never know everything that happened. He has moments of darkness and you don’t know what caused them. You can tell Palpatine is doing something, but you don’t know where it all began or what even started the Clone Wars at all. Then there are the other questions about what will happen to the Jedi: particularly your favourite Jedi and their friends and comrades in the clones.

1999 comes around. Perhaps there has been some intervening years where the Interludes — The Clone Wars cartoons and live-action serials — have died down. Everyone is waiting. Now take the movies know from our timeline. If you want, imagine that the ideas created by George Lucas were written out by other writers: as he had those in the Original Trilogy. Maybe he even has others giving direction to the actors: those who can relate to them and have them react in believable and human ways. Scene-sequencing is interspersed with equal amounts of dialogue and action. CGI is cut down considerably and used sparingly: with a greater reliance on prop development and real world scenery.

The Phantom Menace reveals Anakin’s origins and just why the Jedi think he is so important. Attack of The Clones, three years later, shows us how The Clone Wars began. And, finally and heartbreakingly, we have Revenge of The Sith: where not only do we see Anakin fall, but all those Jedi characters that survived up until this point are mercilessly cut down by the clone troopers that we have, despite our better judgement as adults and adoration as children, grown to love.

Think of the impact of this alternate timeline. Think of how much we could relate to the death of Aayla Secura if we had seen her in various shows fighting for worlds and having her private moments with Kit Fisto. Think about Plo Koon and his time being a part-time mentor for Ahsoka Tano — perhaps even tutoring her in piloting — only to have his ship blown apart by one of his own clones. And the Younglings, those children you saw becoming Jedi … think about the horror in that.

How would you have viewed even the Prequels that we have now if there was all that build-up to the tragedy — a well-written tragedy — that was their Trilogy and the beginning of The Empire.

So now the Prequels are over. You know what happens. And yet … there are still some mysteries. Some Jedi are still alive or unaccounted for. A Rebellion has yet to form. LucasFilm, and perhaps Lucas Arts as it might still be around this alternate timeline can play with that. The fans are devastated by the impact of the Rebellion and Luke Skywalker is felt even more keenly. You watch the films again to know that the Empire fails.

Perhaps Star Wars cartoons and shows are divided into the Preludes — those dealing with the events before the Empire — and Interludes — those focusing on events during the Empire. Maybe some of these shows happen after the Prequels in real-time and others during the 80s and 90s. This is all you have to go on so far.

But everyone wants to know what happens next. They want to know what Luke and Leia do after the Empire falls. They have only had their appetite whet with the Clone Wars and the origins of the Empire. They want more.

And then, after 2005, ten years later after more shows and merchandising — and perhaps with the aid of Disney’s resources — we have: the Sequel Trilogy. The New Trilogy.

Of course, many people might have their own alternate ideal Star Wars watching timeline. Maybe there were no Clone Wars or Prequels. Perhaps the Sequel Trilogy happened right away. But there is something else to consider and it took me a while to personally understand and accept this.

It was Tony Pacitti in his pop culture memoir My Best Friend is a Wookiee that made me consider it. Perhaps one day, if not right now, there will be a new generation of children born. These children might watch The Phantom Menace and Attack of The Clones. Then they might watch The Clone Wars. Then Revenge of The Sith. Then the Old Trilogy. And the New Trilogy. They will see all the standalone films. And right now, it is all open to them. It isn’t perfect and there are gaps and questions, but they have mysteries to explore and wonder to consume.

It would be like us discovering the magic of Star Wars for the first time and their experiences would be different but similar to our own. They have so much more to see and know. They get to do what we can only dream of doing: living a life of imagination inundated by a variety of Star Wars: decades of Star Wars. And no matter way you look at it, this will be their first step into a much larger world.