Sometimes I can still hear it.

It’s the end of the night and Dead Can Dance’s Rakim drifts and rhythmically rumbles through the musty air before the undulating chant of the female singer through the night. The DJ knows what he’s doing. The frenzy of Electric Body Music with its violence of movement and the wry painfulness of clarity that is Alternative Rock have taken their course and had their place in their club.

Now the bar is closed and the black-jacketed, white dressed, neon colour-haired patrons are fewer and dancing with each other in pairs: slowly in tempo with the music. All of reality itself seems to wind out like a wavering road as the woman sings and the man chants in a deeper voice, with stranger words, accompanied by the hollow tap of drums and waves of languorous, synthesized sound.

Everything downtown, far away from where I sleep at the time, unfolds a path in front of me as I watch them dance. I see everything that has happened before and I know that even before being here it had already been in my head: this simultaneity. It gestates through countless songs, and observations, and the weird jerking near-violent movements and pseudo-martial forms that I called dancing. This feeling will continue to grow long after my long bus ride home.

“A million faces, a million lies,”  VNV Nation’s Chrome wavers out before I ever knew its name, accompanied by a weird looping music that somehow taps my heart.

“The streets are cold, the lights go by…”  Like a strange, throbbing, secret whisper it tells me about walking downtown the first time by myself at night, the passing of the streetcar away from Brock, a lost white grin and electric blue eyes, words on a screen leading nowhere, that summer on Euclid Avenue, friends at a Noodle Shop, wishing my friends were there in a bar dancing, a worn convenience store open past three, Higher Ground and Eglinton, cold darkness, past chances, taken chances, lost chances…

When that music comes on, it’s as though my life isn’t linear but multiple-choice: my thoughts fragmenting but somehow being pulled back together again. Then I remember EBM and rock music and it’s as though I’m fighting against the inertia of my life in the epic battle I’ve always fought in my mind: alone and proud.

But then at the end of the night, my favourite night of the week, my Friday night, after dancing through the endless possibilities and talking mutely with people over thundering percussion, I’d see the reality of it. Two men in glistening black leather kilts dance with a white-blonde girl between them. A tall girl moves with a shorter darker one. Then Rakim winds down for the night, the male singer’s last reverberating, “Since forgotten…”

I remember these Friday Nights well as I skirted the rim of the dance floor and danced in the middle of it in my own bubble of space. I interacted with the people much in the same way, just as I still in some ways do. I remember that I don’t relate well to groups. I am like the girl in “Tonio Kroger” that tries to dance like others, on the periphery, but unlike her I know I have my own dance that few can or could care to match. Perhaps I’m getting too old to dance now, too hermetic to move as often. Maybe I already had my chance to find something special in the night.

Yet sometimes, even now, I have this insane urge to contemplate another Gothic Picnic in High Park drinking the liquid essence of fruit salad and watermelon juice alongside white-painted people wearing black leather and lace. Or maybe I’d dress up like the Crow again and go downtown to lose myself in the role while dancing: laughing at those who think I’m Heath Ledger’s Joker instead.

At the very least, I can take comfort in knowing that I can still dance well in one place: through the diaphanous smoke screen of my own words. Right here. 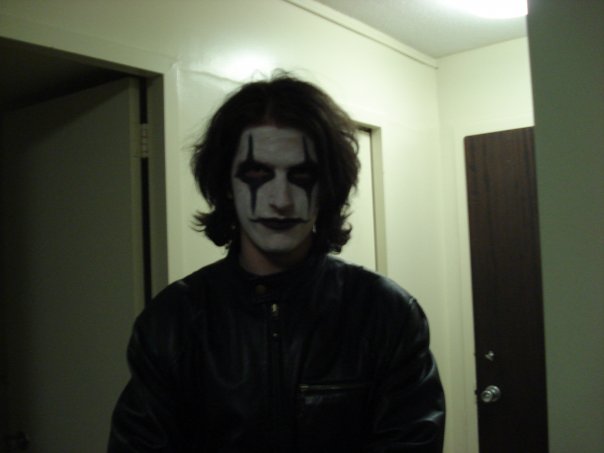 One thought on “Out”