I wrote my first novel in Grade Ten.

In high school, I carried around a clipboard with a manuscript’s worth of lined paper in my backpack along with a book. I would sit in the front entranceway of Thornhill Secondary, outside the door of a class,  in the cafeteria, in the quad, on one of the chairs in my Drama class, and in classrooms before class began scrawling onto that paper with a black or blue pen.

Almost everyday, someone would see me sitting there: in my strange clothes that I mostly wore because my Mom got them and I had to wear something, my Blue Jay baseball cap to keep me hidden from people, blue jeans (because I was bullied over wearing sweatpants in Grade Nine), and my backpack with its many compartments and my handy-dandy pencil case with all my utilities: colour pencil crayons, pencils, pens, erasers … all of that fun stuff. I even had an Art Kit back when I fancied myself a graphic artist: a large bag with an ink pen that I loved, various sized pencils, a grey puddy eraser and a sketch book.

And yes, I did draw characters from my novel.

My novel was called Order and Chaos. It was seventy-five computer pages long with a glossary at the end. It was about a man named Derem who was born in the future after humankind colonized a new Galaxy and created a brand new Empire. There was a war between the human scientists and mages: and the mages lost … their territory disintegrating into an unstable vortex of space known as the Xarion Region. It was thought that magic had died out, as it had once before back on Earth millennia ago, but there were survivors and people still born with the gift.

My world was ruled by a secular humanist technocracy (which my younger self would have loved to have the words for) that was the Empire: composed of different noble Houses that each had a particular division of labour. This same Empire also made the acquaintance of other alien species who stayed out of the whole conflict, and they have differing relations with them.

Derem was a young man who discovered that he was a mage and a Chronomancer: someone who could manipulate time itself. There was an evil villain named Jagan D’Karos, leader of House D’Karos, that wanted to take over the Empire from House T’Jal: that was dying out. D’Karos was a borderline madman who secretly wanted to rediscover magic in order to essentially dominate existence and there was a rebellion against him, and all that lovely stuff.

There were supposed to be two more books. I created outlines for all of them and tried to fill them out. Book One was the only one that truly lived in its way. I also recall holding the entire stack of paper together with one multi-layered bad-ass paperclip. Yeah. Pretty much.

I know for a fact that people noticed me in my school and when I worked on it at summer camp. In many ways, it was my constant companion in addition to the books I read. I wanted to be the next Tolkien obviously. I also wanted to look busy and to focus all of my imagination in a world of my own creation that no one else could really see as of yet.

I had my influences: the Dune II video game my friends were so interested in and which inspired our own role-playing games, Final Fantasy VI (which I knew as III) where magic was a terrifying lost weapon that even helped make Magitek Armour and where there were Espers and epic moments, and I was probably also influenced by Dragonlance and Forgotten Realms.

But essentially, I was inspired to write my first novel by video games.

I would have once been ashamed to admit that: that video games are just for fun and are not real literature. Of course, by the same token, I was all like “screw real literature,” this is is what really does it for me. Basically, I just wanted to tell a story and Final Fantasy VI and Dune II pushed me to do it. They pushed me to go beyond my limits and keep working on something: something beyond me, but was still a part of me.

They influenced me in other ways. I went from the Dune game to reading Frank Herbert’s books and–in addition to Star Wars–got really interested in human political machinations and manipulations. Final Fantasy VI on the other hand showed me the majestic beauty of soundtracks, the utter diabolical power of evil, story lines, character development from a seemingly simplistic 16-bit sprite model, a great depth of humanity, and a variety of different ways to interact with things.

It was not the last time games would influence me to that extent either. As I went up through the Grades, and people watched me–as I would learn directly later–I discovered Chrono Trigger and really changed. Order and Chaos was, to put it charitably, a novella in length. Deceptions of Nevermore was even longer: though it was supposed to be a Trilogy that didn’t survive past the first book. And the title may have been influenced by Secret of Evermore: that I never actually played.

That one was a story that took place in a high school: in a small town called Eldara. There was a great evil buried before the founding of the town and the last survivors of a civilization of virtually immortal mages try to keep it from awakening. But there is one mage that wants to wake it up. Centuries later, a girl named Rachel stumbles onto all of this with her Wicca friend Chara, a borderline obnoxious half-demon named Karnak and so on. I also admit that Joss Whedon’s Buffy played a large role in the development of this story.

I also recall there being a story I called The Epic Project with the working title Revelation’s Saga. I vaguely recall working on it after Order and Chaos but before Deceptions of Nevermore. In any case, it was a post-apocalyptic world where an empire called The First Technocracy cloned and resurrected different species of magic-using creatures called Psytans as slave-labour. As the First Technocracy fell and became the Second, many lands had free Psytans or some that actually tried to coexist with humankind. The term Psytan was a blanket bastardized term that defined dryads, goblins, elves, and other creatures as an entire species. They were cloned from something older and I made a whole world with different cultures.

How the humans treated the Psytans reflected a lot on the different cultures. I remember the Sor’cerin Imperium: where women ruled because I reasoned that more women than men would be magic-users and thus have more power. Psytans there would be fellow Bond-Mates to the sorceresses and the Empress. Whereas the Technocracy was more or less equal in that they wanted to mechanize and control all life.

I was definitely influenced by X-Men, and Final Fantasy–especially since my main character was a young woman named Amnah–but also … Pokemon. All right, that last revelation was a little more reluctant on my part even now, but back then I had a whole system figured out. This book went on for hundreds of lined pages. It was my first insanely long novel. I remember working on it everywhere and I mean everywhere … even in some places I no longer go to.

Like I said, I felt a combination of shame and defiance for video game inspiration with my first novels but they helped me make all of this. They helped me deal with the realities of high school and adolescence. You know, once I showed an excerpt of my Epic Project to the Del Rey Writer’s Workshop when it was a free online community. One person said I should have made it a children’s story and I got really offended by that. But looking back, I was essentially a young adult writing young adult stories. They may not have been very good, but they were mine and the product of my time.

For a while, like some people, I thought that our time had nothing more to say. But what I like right now is that everything from our childhood and onward has a meaning and isn’t as fragmented or diluted as others might claim. I do read classical literature now, but I also read comics and sometimes I even play video games. It has changed and it is still changing me to this very day. It’s also clear that there were and are many more people like me to this regard: upraising the things we love and even when we make fun of them, still see them and make them beautiful.

And I wouldn’t have it any other way.

That said, I’m still working on fulfilling that prophecy from my last Yearbook: 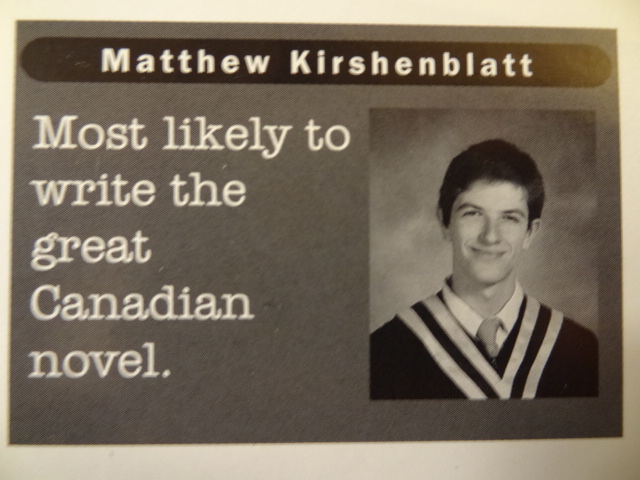