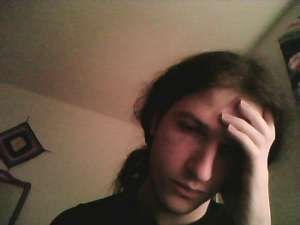 When you make things, do you ever have these moments where something just won’t get out of your head?

You know: there’s a story you know you should be working on, or an article that wants to be written, or some addition to a work you already have just can’t wait or you’re afraid that if do wait in adding it–or creating it–that you’ll soon forget what it was to begin with and it just won’t happen?

Well, since I’m writing about it I can tell you right now that I’ve had all of this happen to me: and more. Sometimes when I have something creative in my mind, it just uses up a significant portion of my memory or mind. It’s like downloading something large on your computer and it only has so much memory space left that can slow things down. That’s a pretty good analogy for being preoccupied with a creative project I think: albeit not perhaps the most positive image in the world.

To mix metaphors even more dangerously, I tend to call it my “autistic mode.” When there is something I’m working on or that I want to make manifest on paper or screen I tend to tune things out a lot. I’m always thinking about it and I have to concentrate on it. My patience can become virtually non-existent (mostly being invested into work or the idea I want to work on) and, as such, I don’t always take to interruptions well. Do not even get me started on telephones or other loud and sudden intrusive noises: you won’t like it after a while. I also tend to retreat a lot more into my natural introverted self and become more of a hermit with less inclination to socialize or make any small talk.

Then when you add to the fact that I have a certain degree of impatience with regards to just writing my work out the first time so I can move onto other things and struggle with some ridiculous perfectionism–of getting it close to being “right” the first time–and you have some of my behaviour during my creative process right there.

It isn’t always this way. Sometimes I can get myself into a calm mindset either right when I wake up or just before I go to bed late at night where things get clearer in my mind and they can actually “come out.” My “process” works even better if I’m just doing something spontaneous and the things in my head flow into place. That is a very nice place to be.

It gets more difficult if I’ve written some quotes that I have to keep in mind beforehand or if I’ve had notes from research. Stories that involve research tend to slow me down a little bit: because it does take time to figure things out and “get them right” in my head. Also, very formulaic mediums like comic book and script forms tend to slow me down a bit as well: though I know that once I complete them I have something very solid to work with. It’s just the journey of getting there that can take a while.

Like I said above, it is that fear of losing “the spark” or impetus in doing the work, or the idea itself that adds probably a lot of unnecessary stress to me. But that’s only part of it. I’ve also noticed that when I have a lot of different ideas that I want to work on simultaneously and I don’t know which to work on first, it can confuse me. I’m no Dr. Manhattan: I have to work with one body and one mind in three-dimensional space and time. It helps when I write down my ideas in note form and I focus on the one that really interests me or seems more imminent in coming.

I just almost always want to get something done now, though I know that’s not always realistic. I have to pace myself, sometimes wait for more details or information, and then move on. Another thing I also try to do is work on something else if the project I’m currently working on is becoming too frustrating.

The alternatives I’ve presented to deal with some of my creative habits and behaviour work with varying degrees of success. A lot of it is attitude and the idea that I need to “download” or finish certain ideas in my head before “making room for more.” I don’t think I will ever fully succeed in doing that and as that TED Lecture Elizabeth Gilbert made with regards to creativity states, some these things happen when they want to.

And sometimes it’s just like Athena: wanting to explode out of Zeus’ brain. Fun times.