I thought I should make a proper update while I still have some time.

My Displacement Twine became something of a one-off project that I came up with late at night while I’ve been dealing with other matters. I’ve already mentioned that I’ve got ODSP and I didn’t, in fact, have to go into a hearing as my community lawyer settled it “out of court.” It takes a major load off that’s been weighing on me for the better part of a year, but even though I know there will be more challenges and annoyances ahead, it still feels like progress.

But now for the stuff that you don’t know about.

A little while ago, I was a student at Ty Templeton’s Comic Book Bootcamp Writing for Comics course. During that time, after doing many assignments, we were supposed to hand in a script: in order to get feedback from Ty himself. Unfortunately, due to life’s circumstances I was only able to submit a rough outline of the script that I wanted to write. So I found peace with that in order to get at least some feedback from Ty.

Instead, he gave me a considerable amount of feedback and actually wants to see a completed script. 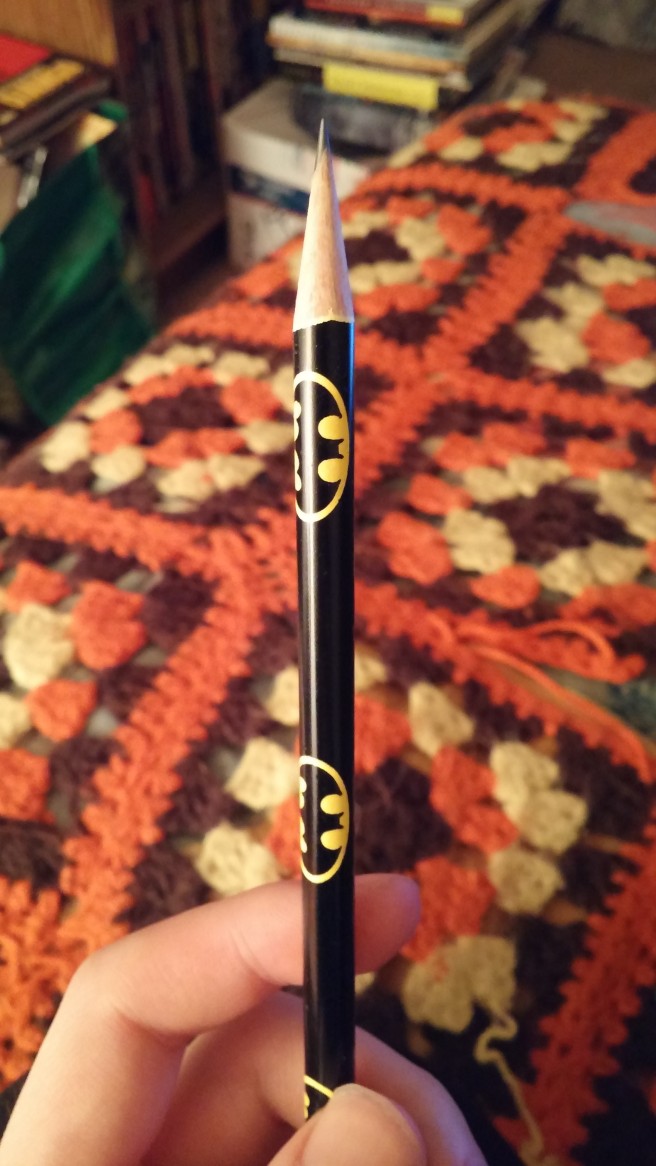 So that is basically why I’d been gone for a month. I’ve been working on my comics script to show Ty Templeton. So far, I’ve finished the Story Mapping phase: where I try to approximate the story beats and pacing on each page. It’s actually made me look at details I might have missed before and even given me the opportunity to hone down other aspects of my outline. I had so much more to say about this a little while ago, but I have been busy. Suffice to say, though, I’m drawing it out by hand in my Mythic Bios notebook with my 1989 Batman movie pencil that you can, no doubt, see in the graphic of this Blog post.

It’s sad because I know there are other insights I could talk about and refer back to, but basically for me this has been creating the skeleton of my story which, considering its subject matter, is very appropriate. But basically I am outlining each page, sectioning it off into threes, and placing the basic idea of what happens in every section followed by beats to show what happens in each panel of that section on each page.

But now I have entered the Storyboarding (wow doesn’t that sound like some kind of psychological torture technique) Phase: where I am going to have to approximate what visually goes on in those panels. Much of this is going to start off with me reviewing the notes I’ve taken from Ty’s class to the point where I’m confident in drawing it all out with crude and inclusive stick figures that I will have to describe with thorough wording for the Writing Phase of the Script: and that doesn’t even include the dialogue and captions that I need to write clearly and distinctively.

Then I’m going to show it to one of my fellow classmates, Kim — who is awesome — and then submit it to Ty when everything is said and done. But yes. I even have plans for further stories after this one, but the World-Building Phase — which includes more descriptive writing — will have to continue along with my capacity to do so and remember that an artist needs to know details but also have the freedom to do their own thing.

I’m almost done with my update. But script writing and submission aside, and have the attention span to finally sit down and knock this post out, I also want to mention that I’ve applied for a writing position in an online magazine called Panels: a place that talks about comics, comics subcultures, and the writer’s reactions and insights into them. It’s right up my alley and it’s a paying job.

Some of the sample works I’ve sent them include: When I Recognized Elfquest and Chasing Amy and Reviewing the Laurel Leaves.  So we will see whether or not I get accepted into their ranks and, if so, it is definitely an exciting start.

So yes. A lot of stuff is happening on my end, finally, and I just need to keep at it while — at the same time — I also need to pace myself. I don’t know when I will write here next, but hopefully I will have more to talk about and more to report.

Take care everyone and thank you for continuing to follow me on this journey.